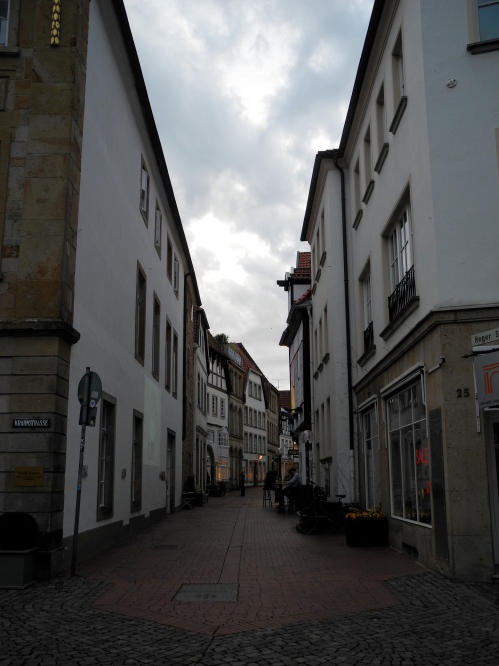 Streets are a means of getting from one place to another, and sometimes our destination is a house or business on a particular street, but are streets destinations in themselves? I was looking back over some travel photos and trying to remember famous streets that I’ve visited, and work out why they were famous.

I once visited the extremely steep cobbled street in Shaftesbury, England, which is called Gold Hill, and was apparently made famous by a 1970’s TV commercial for a brand of bread I’ve never heard of. It is very photogenic, but I’m glad I don’t have to climb it every day – definitely not the street to learn to ride a bike on! Of course there are many other streets that have been made famous because of prominent TV shows or movies that featured them. In Melbourne you can go on a tour to the Ramsay St made famous by ‘Neighbours’ – but I have made a point of never going on that tour. When you travel, you often see special polished plaques that show where famous people were born, or died, or where historic events took place – I always feel ignorant when I’ve never heard of the person mentioned on the plaque. In Germany I saw ‘Hier war Goethe’ (Goethe was here) on a house – I believe there’s a bit of a joke that he was just about everywhere in Germany, perhaps the equivalent of claiming Queen Victoria spent a night in your town’s hotel. Streets are even famous because fictional characters lived there, like Baker St and Sherlock Holmes, or Lyme Regis and Louisa Musgrove’s fall from the steps of the harbour wall in Jane Austen’s Persuasion. Some cities are famous for all the streets, rather than just one, like Hanoi and the chaotic motorbike and other traffic and the constant din of horn honking, or San Francisco and the steep steets and iconic trams.

I visited Drosselgasse in Rüdesheim, a town on the Rhein in Germany. Originally a thoroughfare to the river in the 15th century, Drosselgasse is a very narrow laneway in the old part of town, which is full of elaborately decorated taverns and restaurants – apparently in the summer crowds of tourists flock to it and there is music playing along the street all day and night long – but we were there in May and I was able to get a photo with no people in it ( don’t remember hearing any music either). Other streets are known for a particular ethnic group that inhabited the street, like Singapore’s Arab Street and established shops or restaurants there, and like Chinatown in many cities. On a visit to Seoul we were looking for lunch and emerged out of a train station onto Seoul’s street of toilets and bathroom fittings. It was a long walk to find food…

The streets near your home or work often become the places where your own history is based. I remember certain streets because I lived there, or a friend did, or I once visited a shop there that has now closed down (like the chemist where I accidentally hooked my umbrella on the corner of a glass shelf and sent a whole row of bottles of calamine lotion cascading onto the ground where they broke and made a large puddle on the carpet – the people in the shop were very gracious, but I avoided that shop for a year afterwards and was sort of relieved when it closed down)… Sometimes I remember a street because I took a walk with someone and had a significant conversation. The subject of the conversation somehow becomes interwoven with the places you pass as you converse, or the fences and walls you stop and rest against.

Last year at a film festival I saw two French films that were filled with scenes of characters walking. One film, Tirez la langue, mademoiselle, translated into English as Miss and the Doctors featured the two male leads (brothers who are doctors) and the female lead walking separately through the 13th arrondissement of Paris at various times of the day and night, meeting up in a cafe, or going to or from work. The prevalence and extent of these scenes made me ponder why they were there. Was it a statement about French life? Did the individual walking styles of the characters reflect their personalities? Or was it just an opportunity to show the street scenery – the walking equivalent of a car chase film shot in narrow Italian streets?

Rohmer in Paris was another film that brought together numerous scenes of characters from the films of director Eric Rohmer walking through Paris. The director of this film, Rohmer in Paris, also weaves his own history of Paris and his intersections/obsession with Rohmer into the movie. The streets of Paris are very scenic, of course, and there is something dynamic about walking scenes. Something about the action of walking seems to help the mind to process things.

What do streets mean to you? Do you have a favourite street? On the one hand I liked experiencing the over-the-top lighting display of Singapore’s Orchard Road on a night near Christmas, while on the other hand holding fond memories of an unpaved avenue lined by elms half disappearing into early morning mist. Sometimes I do like to stop and ‘smell the roses’ on the street, but other times I’m just passing through…

Filed under A reflective life