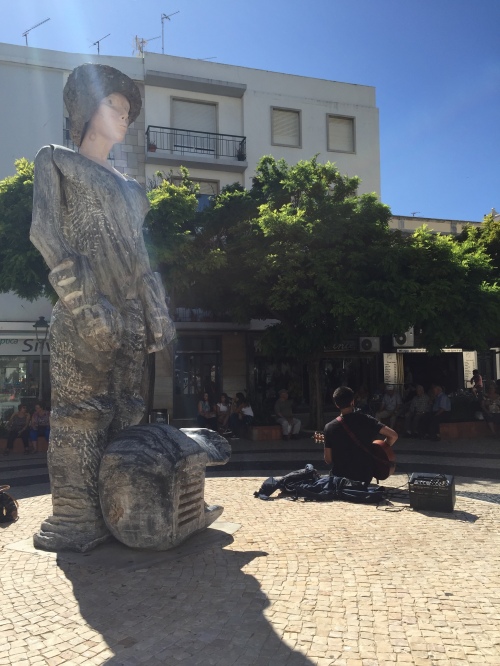 When you are on the go traveling, what do you miss from your more settled life back home? Maybe what we don’t miss tells us something about the things we could happily life without.

I recently went traveling for nearly 3 months – some of the time I was living in the one place with friends, and the rest of the time I was traveling around, staying no more than two or three days in any one hotel. I can tell you straight away one of things I did not miss while I was away and that is TV. At home I watch far too much, but while I was away I was not even tempted to turn on the hotel TVs, I preferred to either just sleep or read in the room, or else head back out the door for more exploring. And of course I didn’t miss all the routines of settled life like cleaning, cooking and buying groceries.

On a sunny saturday I arrived in Brussels and wandered my way from Brussels-midi station through a number of streets with the eventual goal of the Magritte Museum. When I walked uphill and got to the top of the Mont des Arts, there was a busker playing guitar and singing in English in an open area. When I heard some familiar songs sung in my language, I realised how much I missed music and particularly the freedom to sing. I suppose you could sing in the hotel shower, but apart from that, there’s not much privacy or freedom to sing when you travel (unless you’re a musician, or you’re on a bus tour where people want to revive their school camp bus-singalong days).

I came across a few buskers in my travels at times when their music gave me pangs of longing. When you travel to countries where your own language is not spoken, even the simplest things become hard and hearing songs sung in your own language provides a real touch stone. I have to say I almost never give money to buskers (although I did give money to a classical guitarist at the market who did a great rendition of ‘Paint it black’ earlier in the year). But I know now how much a (good) busker can give you something you didn’t even realise you were missing and so I plan to be more generous to buskers in the future.

Three songs to warm yourself by

Whenever I’m asked what the ‘most important’ something or other is, I struggle to identify it, so I just have to pick whatever comes to mind and start there. Perhaps if it comes most readily to mind then that is what’s most important to me at that time. Songs have always been important to me – songs of many genres. The first song that came to my mind was ‘Let the sun fall down’ by Kim Richey. Strangely I first heard this song when watching an episode of Buffy the Vampire Slayer and the song really struck me. It captured the emotion of the scene that it was pared with and it has captured my emotions at times since then. The theme of the song strikes a chord with me and provides a kind of life principle – to let in the sun – literally or metaphorically. In the song there is a line ‘that old dark cloud, acts like he knows you. He takes up too much time’. The sun is like a beacon to return to in the dark times of life when you need to actually be reminded that the sun is still there and to let it in and let it fill the room. I have never heard this song sung live, but I have had the chance to hear Kim Richey live twice and that is another thing that binds me to songs and their singers. A few singers and groups I had known for years from recordings I had the chance to hear live in the last couple of years and was not disappointed. Hearing Kim Richey’s sweet but strong voice depended my love of her music, I only wished others in the audience would have appreciated it if I’d sung along because I was so tempted to do so.

A few years ago when I went on a small group tour across the Nullarbor plain, we camped along the way near a dam at Afghan Rocks. No-one else was there but our group as the shocking heat of the day turned to the relative cool of the night and we hunkered down in our canvas swags, our heads peeping out at the wide starry sky so vast compared to the city sky interrupted by the lights of humanity and their dwellings. In our Nullarbor tour group there was a mother and her 8-year old son. In conversation I mentioned that I used to sing in a gospel choir and as night fell around our camp fire she asked me if I’d come and sing a night song to her son as he prepared to sleep. I was a bit thrown as I’m a bit cautious about singing alone and unaccompanied and I couldn’t for the life of me think of an appropriate song. Nothing literally nothing was coming to mind except panic. Eventually I thought of a song that is an easy unaccompanied one but mentioned to the boy’s mother that I’d mostly sung gospel and couldn’t think of anything else. She didn’t mind and she also dragged our Dutch male tour mate over to listen – enough to give me more desert stage nerves. The three of us stood in the dark around the lying boy’s swag and I sang ‘Amazing Grace how sweet the sound…’ and there was something mysterious and spiritual in this time. It wasn’t that we all believed the same things but there was something about the music and the night and the stillness and the haunting floating words and melody and people really listening there in the dark. Of all the places I’ve ever sung in that was the most sacred.

A few years ago I reconnected with a friend who goes to live music a lot and expressed a desire to tag along. My friend particularly devotes certain weekends of the year to significant Victorian music festivals and the the first I ever attended with his group was the National Celtic Festival in Port Arlington. A mottled band of musicians and music lovers gathers together with sword-weilding vikings and bagpipes can be heard drifting from the hillside out to the jetty where the tall ship waits to take festival goers on musical cruises. The first year I heard so many jigs, reels, polkas and strathspeys I felt like I’d come home culturally. The energy, the speed of the musicians, the uplifting melodies that somehow bring a joy and make you feel ready for anything. Again there is nothing like live music to really stir you as it thumps through you and echoes around you, as you’re stirred to sing along or tap in time. The Celtic festivals run workshops and one I’ve attended was a traditional Scottish singing one lead by a practitioner who learnt from a dying breed of Scottish singers. I learnt to really appreciate the unaccompanied true voice embracing some difficult timing and tongue twisting words. One song that has stayed with me from that workshop is ‘Mary Mac’s ma’s making Mary Mac marry me, my ma’s making me marry Mary Mac’. Such a tongue twister but also such a whirling tune as your voices are all stirred around in a frenzy of M’s and speed as you try to get your mouth around the words. Hearing about the Scottish balladeers reminded me how far my family is culturally from our Scottish family roots. But hearing and singing all these songs also stirs me to picture the Western Highlands where I once travelled and it pulls some kind of invisible chord that still ties me to Scotland, Ireland, England and Wales and the music that races on fiddle, bodhran, mandolin, guitar and tin whistle.

Filed under A creative life, A reflective life