All the little victories 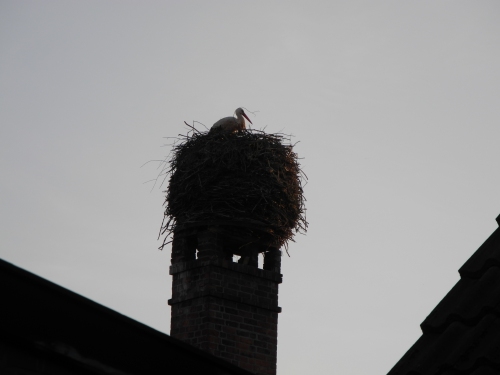 I’ve been thinking a bit about the nature and symbols of victory as I was trying to choose one photo for this post. The quadriga was one of many ancient symbols of victory: a statue with four horses pulling a chariot ridden by a triumphal figure. In classical mythology it was the chariot of the gods, such as the one Apollo rode across the heavens. Many leaders have built arches and other structures and held parades to celebrate their victories in battle over other nations across the ages. Flags were flown, torches lit, garlands worn, weapons raised high in triumph.

Apart from sporting triumphs, today our major personal victories might be anything from winning a tender for a project at work, having your cancer go into remission or seeing your child finish high school. But we also have little victories every day and the stork above reminds me of this. Sometimes when life is hard it is victory enough to still be living and standing up by the end of the day, to know your family is still safe and dry and to have had the time or the energy to cook a meal before falling into bed. Sometimes surviving physically or mentally is a big victory. And the little victories add up, sometime there may be periods where you’re just surviving but later you have the energy to look out from the nest and see the rest of the world and get back to all the other things that you want to achieve. Victories should be celebrated – yours, mine, everyones – big or small, invite your friends, wave a flag, raise a glass or sing a song. Whatever it was, however big or small, you did it.

Filed under A deliberate life